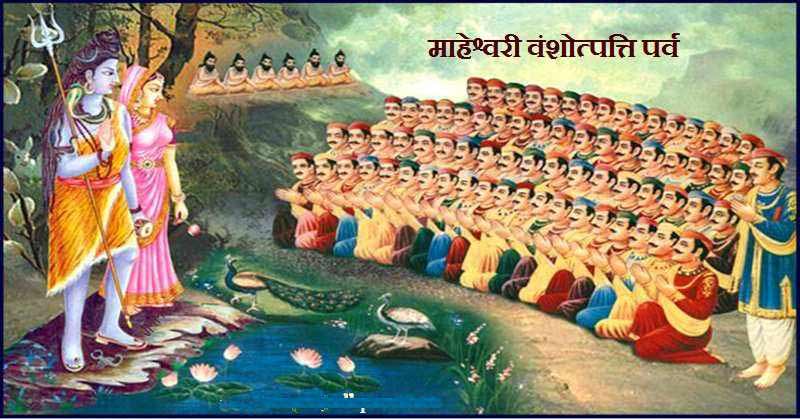 There are several legends about the origin of the Maheshwari community but the one generally accepted places the date of their origin as about 4,000 years prior to the Vikram Samvat. Once upon a time there was a king called Khadaksen who ruled Village Khandela (near Jaipur). The kingdom was well administered under the able and efficient administration of King Khadaksen. The people of Khandela loved their King very much & lived in peace and harmony.

The King had 24 wives. He had everything he wanted except a son who could take over his throne when he grew older. The King worshipped saints and to get their blessings he performed a big Yagya. Being impressed the saints & holymen blessed the king with a son but warned him that the son should not go towards the north side till his age of 16.

Shortly one beautiful day his 5th wife Queen Champavati gave birth to a beautiful boy. The child was given the name of Sujan Kuvar. The whole kingdom of Khandela celebrated the birth of Rajkumar Sujan Kuvar. He grew up well trained the arts of Administration & Weaponry.

Some years later young Sujan came in religious touch with the Jain Religion and accepted it completely. He started destroying Hindu temples and building Jain temples in their place.

One Day while he was on his way for hunting with his 72 Rajput soldiers he came across Sadhus (holymen) at performing Yagya. He ordered his men to destroy the Yagya immediately. The Sadhus were enraged and cursed the King and his Rajput soldiers such that they were all converted into Stones.

When this news reached the now elderly King Khadaksen, he died of sorrow. The Kingdom lost their its king. 16 queens committed Sati and gave away their life as per the then prevalent tradition.

Chandravati, the wife of Sujan Kumar along with the wives of the 72 Rajputs went crying to the holy saints and begged them to forgive their husbands. The Saints gave these wives a Akshay Mantra by which they could impress God Shiva & Goddess Parvati. The wives gave up their homes and started staying in caves with the sole goal of chanting the mantra. Finally Lord Shiva & Goddess Parvati were impressed by their devotion & love for their husbands and gave back the lives of Rajkumar Sujan & the 72 Rajputs. At once all of them came to life as if they were awakening from a long sleep. Getting their life back all of them went to Lord Shiva and prayed to him to forgive their sin. Lord Shiva asked these men to give up their weapons and violent way of life and begin a new life as Vaishya i.e. businessmen and not Kshatriya. He blessed these men to form a community which would have his eternal blessing – Maheshwari – which when translated means the Boon of Lord Shiva. However, the soldiers were hesitant to accept their wives since they still belonged to the Kshatriya caste. At this point Parvati Mata said "All of you take four parikramas around me and whoever are wife and husband their gathbandhan will be joined automatically and they will get married into the Vaishya community". At this everyone did so and they were re-joined as Vaishya husbands and wives. Even today four feras (parikramas) are done outside the wedding Mandap during Maheshwari weddings as a reminder of our origin. Lord Shiva gave his blessings to the seventy-two Vaishya couples on the 9 th day of Jyesth Shukla Paksh in the 9th year of Yudhisthira Sanvat. On this day newlywed brides and grooms are encouraged to worship Lord Shiva and Mata Parvati puja so that they can be blessed with children and live a happy and joyous life eternally.

Each of the 72 Rajput couples constituted a separate Khanp and in this way seventy-two Maheshwari khanps or Surnames were created. After this five additional Khanps were also added.

As far as religion is concerned the Maheshwaris worship Lord Shiva and Goddess Parvati. Certain special rituals and festivals are observed by them too. A rite which has great significance for the women is called Baditeej. It is celebrated on the third (Krishnapaksha) of Bhadrapada of the Vikram. Samvat year is the time when women fast and pray for the longevity of their husbands and unmarried girls pray for good husbands. Only the men cut peenda after which the women perform puja and break their fast.

Gorja or Gavraja is celebrated on the third day of Chaitra (Sudi) when Shiva and Parvati are worshipped. Unmarried girls worship the goddess Gorja with gulla (the inside of green grass) for sixteen days and married women worship her for eight days with doob.

Maheshwaris celebrate Raksha Bandhan twenty days after the usual date of its celebration on the fifth of the second half of Bhadrapadand. It is known as Bhai Panchami or Rishi Panchami.

Jaystha Sukla navami of the Samvat year is celebrated as Mahesh Navami to commemorate the birth of the Maheshwari community when Lord Mahesh (another name for Lord Shiva) is worshipped.

Maheshwari Pragati Mandal, Mumbai functions through its Central and Regional Samitis. For better administration, Mumbai : has been bifurcated in eight Zones.

Details of Samiti members may be accessed here:

Maheshwari Samaj is in the forefront of country’s various organised and progressive Societies. It occupies a unique position amongst the nation’s other Societies due to its vast and multifarious specialities / qualities. The salient features of Mandal’s Vision about Maheshwari Samaj in the 21st Century are as follows:

The Samaj to protect and preserve its traditional culture, values, faith and dignity while adopting need-based changes to continue to march forward towards social completeness.

The Samaj to have family happiness, love, respect and trust for each other and to be a part of each other’s happiness and sorrows. Also, to have an inspirational environment all-around, particularly to make life of Senior (Aged) Members of the family happy and peaceful.

The Samaj to follow the time-tested belief that ‘prevention is better than cure’ and undertake purification of mind, body & soul by practising Yoga, Exercise, Follow rules of Nature and have Pure and Nutritious diets as also regular Health check-ups.

There should be an environment of encouraging individual capability and expanding capacity in the Samaj so that every child - male or female – gets the best education according to his/her potentials, to suit the needs of changing scenario.

The Samaj to follow/inculcate traditional human values, time-tested social traditions and culture-oriented “Teej” and other festivities so that it continues to remain least affected by the wide-spread distortions and disturbing trends all around.

The Samaj to have a wide-spread participation of Youth and Ladies in the Social activities so that it can protect and preserve its traditional values, customs, faith and dignity, etc.

Depleting population has, of late, surfaced as an issue of concern in the Samaj. Bearing this in mind, each household to actively observe its family planning appropriately, so that Maheshwari Samaj continues to be unique eternally for the cause of not only national service but also for the service of the humanity at large.

Economic activities are at the root of KARMA of Maheshwari Samaj. Therefore, in the World of Commerce, even in the changing scenario, the Samaj to continue to observe pious principles and work ethics so that it can achieve all-round success in the Economic World and be prosperous.

Service to the Man-kind The Samaj to become capable, physically and economically, so that it continues to play a leading role in the service of the humanity with appropriate contributions in various ventures of public importance and also in natural calamities.

ORGANISATION AT A GLANCE